I was not satisfied with the graphics I had for my second level. I knew I had to do better. A resolution of 320×200 is very low, but I thought about what games like ‘head over heels’ could do with that and I knew that even a pixelart noob like me, could do a lot better.

So I thought it out in my head (I do a lot in my head, a nice roomy workspace, that) and here is a screenshot of what it is now: 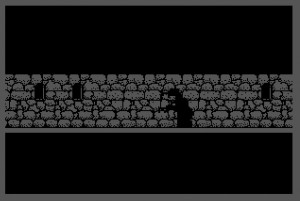 A lot better! A nice wall, with a vague shadow of a vampire on it. Helsing has to go on there as well, I think I will do a bit more floor  and there must be candles (to cast the shadows).
Not sure if level 2 will be harder than level 1, but the vampires will be faster and I’m thinking about starting with a limited amount of stabs.

You can miss one or two times, but after that it’s bye bye for Helsing so when you miss a vampire in level 1, you’ll be pleased if level 2 is not even harder.
Of course hackers will make a nice trainer for that, but hard core gamers will do with what they got.

Anyway, I got a ‘merry christmas’ mail and decided I should answer that in style. Here’s what I made for christmas: 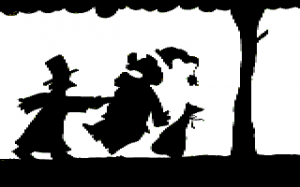 I thought about doing it in PETSCII (the C64 version of ASCII), but I would never make something with the quality they make in the competition (yes, they have competitions for that!, look it up: http://csdb.dk/event/?id=2139, the winning picture is amazing http://csdb.dk/release/viewpic.php?id=121498&zoom=1)