The page is on the internet for a while now, but I had some trouble getting everything working properly, but now I think it’s good enough to post about:

Twitter now has a 280 character tweet limit, so how much binary can you fit into it? First of all, there is the encoding, you can’t just post a binary, you have to encode it. You could post in zeroes and ones, Twitter would allow that, but that leaves 280/8 = 35 bytes. That’s not much!

And I think you would like to add maybe a hashtag, a link and a simple message, so you wouldn’t even have 35 bytes.

HEX is a bit better, and Twitter can handle that easily. You could code directly from keyboard if you have the programmers handbook ready.

It takes 2 characters to encode a byte, so at most you can tweet a 140 bytes program.

I knew about Base64, where you use 64 different but standard characters to encode a binary. With Base64 you can encode 6 bytes in 8 characters. It’s used a lot on the internet and the VICE.js demo uses it to encode en decode .prg and d64 files.

Encoding is not easily done without tooling, you have to get all the separate bits from your program and make characters from that. But luckily there are enough tools online to help you with that. You could also use some script to automate the process.

At most you can use 75% of the 280 characters of a tweet. Pretty good. But that could be improved on, surely?

I started searching the internet and found out people were already using twitter to post binary data (of course!).

Someone developed Base65536 where you can encode  2 bytes into every character. Follow the link to get several implementations of the algorithm. The author of the algorithm also has a more thorough  explanation of the background.

The algorithm uses characters that are not your standard latin characters, but Twitter should accept them.

EDIT 10-8-2018: Twitter has its own way of calulating length, the longest program I managed to tweet was 256 bytes. So

2 bytes into every character

is not true. But still better then BASE64

Of course you’d want to be able to see what the program would do, so I tried to string everything together on a page on my website:

This is all running at the moment, but there are still some things left to solve:

Anyway it’s working OK, so here is  finally the link: 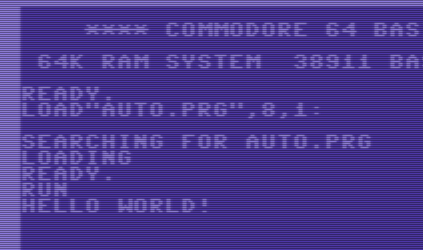 Press space to go up, but be quick! You’ll die quickly then it will reset (but SYS2062 will restart or F5 for browser refresh).

here’s what others can do in 256 bytes, ‘A Mind Is Born’ by Linus Åkesson.

« At this company, we’re developing resources

@FREEZE64UK I see now that I was wrong (but they are very similar). Maybe give others a try first?

@FREEZE64UK Man, that's hard. I recognize wizardry and Shamus. I should know 6 and 2 is familiar.

So... you think you know what MIDI sounds like? You might want to reconsider 😁. Sweet, sweet entry to the Nova 2022 music compo. twitter.com/MSGS_Wav…

@PaulJanPauptit a complete demo crazy family What are the odds? Did someone check that area for radiation?

If there has been one hoax it must have been: "the science is still unclear about this" twitter.com/Rainmake…

@C64Reloaded That Galway tone is brilliant! I can't compare him with Hubbard though. They're just SO different.

@MonstersGo I have trouble looking at it without any spacing. It's horrible!

@JohnKennedyEsq I tried Z80 but couldn't get over missing indexed adressing

@PandaActual Sometimes in a good way, having an idea that I instantly love and try to work it out in my head. Or trying to brainstorm with myself and the ideas keep on coming.

"There are hardly any excesses of the most crazed psychopath that cannot easily be duplicated by a normal, kindly family man who just comes in to work and has a job to do" Terry Pratchett, small Gods

@JoachimFroholt 50! Horrible creatures. since a lot of other decisions are influenced by our emotions I wondered if some people that would refuse a COVID vaccin would go for this one (and maybe change their opinion on vaccines in general)

@fuzzweed @rarrr @CommodoreBlog Yeah, for your Neos mouse that info did not matter at all :)

Would be interesting to see if anti vaccination people would refuse this too. twitter.com/NPR/stat…