For a change of pace I decided to use a few of my trainers (and my new map feature) to try and finish this game for once (never reached the end before!).
At first I implemented the ‘never lose your sword’, ‘giant invulnerability’ and ‘endless lives’ trainer options.

Regrettably I played without making any screenshots until the last, so there wont be many pictures.

OK, I knew the game was hard, but I didn’t exactly know just how hard.  With just 5 lives, you have to navigate a maze, make no mistakes in the use of swords, don’t make too many mistakes with wrong turns (where you get a insta-kill), make not too many mistakes with the giants and do some pixel perfect movement to kill the samurai.

I think there are some points where there are samurai you can’t realistically kill. And even with all these trainers it takes a lot of time to come to the place where the princess is.
The game manual tells you that after you have saved the princess you have to get her back to the escape boat while being chased by Li Chi, the angry father.
And boy is he angry! Even with a walking cane he’s very fast. Every screen after finding the princess you have about a second before the father enters the scene and starts chasing you. And you’d better not make a mistake turning a corner because, he’ll be on you right away.

And making a mistake turning a corner isn’t as unlikely as it sounds, because the collision with the environment is not based on visual information, but based on location on an invisible tile system. On the picture you see a tree on the bottom right of the player, that looks to have some free space in its upper left corner. But that’s not passable, because it is part of the tree’s tile.

And so you may have been perfect in the game up to meeting the princess but then you have to navigate the maze and evade the father with just 5 lives. And going into a dead end means another life gone.
In practice for me it would be impossible.

I ended up finding and implementing another trainer option, where the father can’t kill you (quite similar to the trainer option of invulnerability to samurai which I already found, so not hard to do).

In total I think I spent about 15-20 minutes including making the extra trainer option to get to this point: 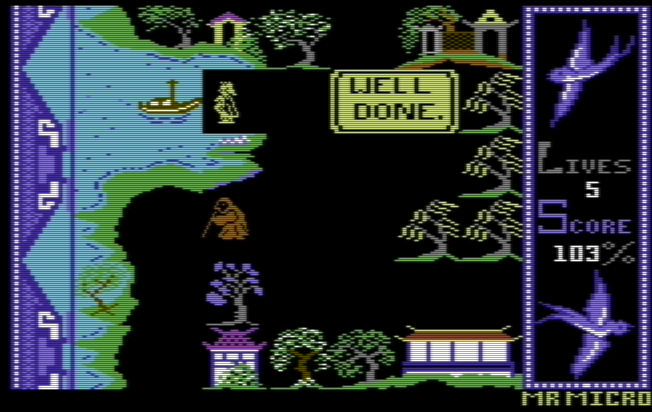 You can see the father in red below and me and the princess in yellow next to the boat (the sprites overlap so they’re hard to distinguish).
Also you can see I have a score of 103%. I think that’s because I killed three samurai the makers didn’t think I would be able to kill.

Playing this way gave me three ideas I would like to add to the game:

The first one is done, but the other two need some work. But first get the map done properly.

@jmannius @norbert_harrer @Arcade_Adriano Isn't there already one? 10 year anniversary or something? And the original was on PC cause that's what I played it on

It uses its tentacles to appear faster than it really is. twitter.com/Rainmake…

@genesis_book Comrade Ballbagowitsj doesn't understand why anyone would review such a boring computer game.

When you feel no guilt twitter.com/cat_mpar…

But it's still better than the other version. pic.twitter.com/SXxw…

Just great! This is the year the UK does well at Eurovision. Just when I made this cartoon for Europass instagram.com/p/Cdgd…

@dosnostalgic And if you can't choose the 16 colours and are limited to a 160x200 resolution you get this pic.twitter.com/wI4h…

@tha_rami A popular grumpy opinion (I've voiced enough of my own to recognize those) but hasn't been like that for years. they said eastern European countries would only vote for each other, never happened. There are trends, hypes, even politics, but it's mainly a big unifying party

@PaulJanPauptit Ooh, that would be something 🤪 a thumping chip tune by @maniacsofnoise while the floor lights up in a pixelated plasma effect..... Nah, I like it how it is: one of the few positive European experiences we have.

She had a good point. What she didn't realize was that video games would be replaced by DIFFERENT video games. twitter.com/segamsti…

@caracompass If not for the music, do it to feel the boundary transcending positive vibes.

@gregnacu I think that's a good idea. It will help adoption.

@TLtwg Nice picture! Don't want to start another platform war, but surely the music of the C64 version must be superior. It was amazing!