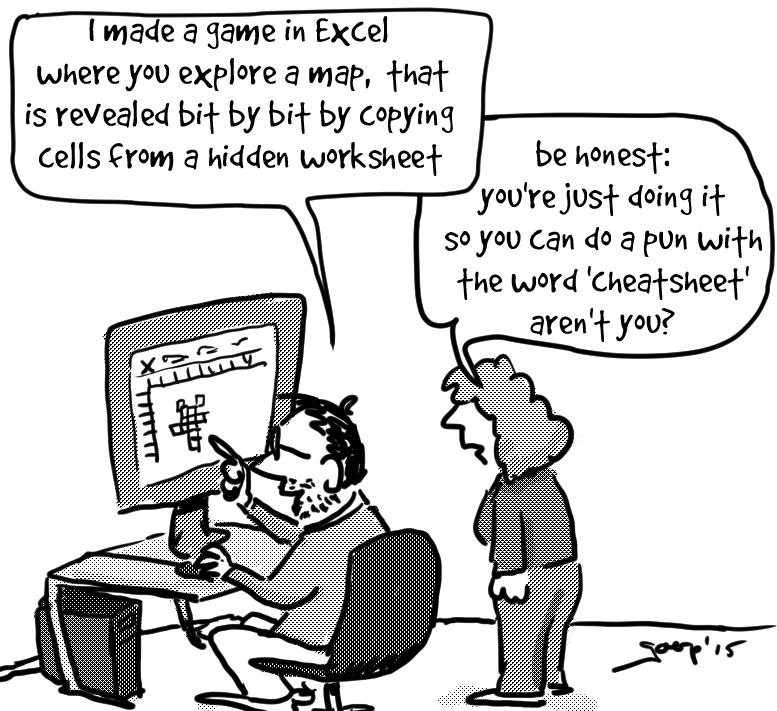 While Í’m on the subject of Excel games . .
In a few weeks another Ludum Dare is coming up. I probably won’t be competing although the idea of making another game in Excel is really appealing.

At this point in time I don’t really care if most people won’t be able to play my game.

@jmannius @norbert_harrer @Arcade_Adriano Isn't there already one? 10 year anniversary or something? And the original was on PC cause that's what I played it on

It uses its tentacles to appear faster than it really is. twitter.com/Rainmake…

@genesis_book Comrade Ballbagowitsj doesn't understand why anyone would review such a boring computer game.

When you feel no guilt twitter.com/cat_mpar…

But it's still better than the other version. pic.twitter.com/SXxw…

Just great! This is the year the UK does well at Eurovision. Just when I made this cartoon for Europass instagram.com/p/Cdgd…

@dosnostalgic And if you can't choose the 16 colours and are limited to a 160x200 resolution you get this pic.twitter.com/wI4h…

@tha_rami A popular grumpy opinion (I've voiced enough of my own to recognize those) but hasn't been like that for years. they said eastern European countries would only vote for each other, never happened. There are trends, hypes, even politics, but it's mainly a big unifying party

@PaulJanPauptit Ooh, that would be something 🤪 a thumping chip tune by @maniacsofnoise while the floor lights up in a pixelated plasma effect..... Nah, I like it how it is: one of the few positive European experiences we have.

She had a good point. What she didn't realize was that video games would be replaced by DIFFERENT video games. twitter.com/segamsti…

@caracompass If not for the music, do it to feel the boundary transcending positive vibes.

@gregnacu I think that's a good idea. It will help adoption.

@TLtwg Nice picture! Don't want to start another platform war, but surely the music of the C64 version must be superior. It was amazing!